The ISOL-8 MiniSub Axis is a mains conditioner unit about the same size and weight as a conventional full width amplifier. The unit is the higher specification sibling of the MiniSub Wave and is competing with units such as the Isotek Aquarius. ISOL-8 was started by Nic Poulson who originally set up Isotek, and is the brains behind the technology used in these devices.

Mains conditioners such as this ISOL-8 MiniSub Axis tackle two types of electrical noise – common mode noise and differential mode noise, which can have adverse effects on the sound quality performance of good HiFi. In simple terms the former is noise created by all electrical appliances – everything with a power supply, and the latter is noise often referred to as RFI (Radio frequency interference)– transmitted frequencies that surround us but cannot be seen, and more common in an internet world.

The unit has four low current outlets for sources, pre amplifiers and Digital to Analogue Converters (DACs) and two higher current outlets for higher current power amplifiers, each outlet with its own separate filter. Every socket can tackle common mode and differential mode noise with what ISOL-8 call ‘Transmodal’ filter technology. In addition each outlet filter reduces component cross contamination which ISOL-8 say is often overlooked in conditioners. The basics is that each system component can generate significant mains noise and using one filter in a whole system allows noise generated by components to cross effect other components in the system because they are connected in parallel after the filter. This might happen using a bog standard power bar of the type bought from a hardwear or DIY store.

By using filters in a multiple filter configuration and precluding possibilities of cross contamination, these effects are reduced. In addition to the MiniSub Wave, the Axis variant has DC blocking which involves removing DC waves that can get into the AC main supply. ISOL-8 say that AC transformers found in audio equipment cannot, by nature, tolerate significant DC without being compromised. For the privilege of this additional specification, price goes up from £1000 for the Wave version to £1299 for this Axis unit. In addition to the filtering or conditioning and DC blocking, both units come with spike and surge protection for peace of mind.The MiniSub Axis has the same layout and filter compliment as the MiniSub Wave.

The MiniSub Axis uses adopts a conventional visual design which can be purchased with a machined black front panel at an additional cost of £100, or the standard silver version. Both are well made and the unit is sturdy and mounted horizontally with rubber legs and at a reasonable weight of 6.7kg will need to be well supported in your rack. Each of the sockets have sprung loaded flaps which are hinged at their lower ends such that you can place the unit at the bottom of your HiFi rack and with components connected, angle the wire leads upwards. Unfortunately in difference to some similar designs, the sockets cannot swivel to allow the plugs to be connected in different directions. There is a standard IEC socket for mains connection and it is necessary and prudent to buy a screened power lead of a good quality. In some respects this is the most important cable. For my test I used the ISOL-8 Wave mains lead. The MiniSub is not described by ISOL-8 as being typical for use solely in HiFi applications but also for AV systems too.

I started off using a bog standard six gang power bar with spike and surge protection that can be purchased for less than £20-£30. All my six HiFi components are connected up to it and I have, at the time of this test, been using this power-bar for some time so am used to the ‘sound’ it produces. I should also say that I live in a new build flat block with around ten flats, I don’t use a separate mains spur for my HiFi which is often suggested by some purists as the first thing you should do in mains isolation for HiFi. Other than the conventional items such as a fridge freezer and roof heat exchange system which is always on, and items left on such as a router and connected devices like iPads etc, I suspect that the electrical noise environment I live in is fairly typical.

Moving to plugging all my components into the ISOL-8 you notice there is an improvement in detail. Playing guitar music is more pronounced and natural and there is more slam to the music. Cymbals are more standout-ish, the sound is more dynamic and I noticed a better natural edge to some electronic instruments. Vocals are clearly better too, and playing well known female vocalists, it’s obvious the sound is more natural and forward. Trying electronic music it was evident bass is noticeably punchier and deeper and better defined. The ISOL-8 gives a warmer presentation to systems which would help leaner sounding HiFi, but it gives this warmth without taking the speed and detail away from an already dynamic system. It’s generally a more cohesive sound.

Going back to the power-bar again with all components plugged into it, to check my assertions of the sound changes, I found an overall lowering in detail, reduced bass richness and warmth. Also just a less realistic and flatter sound without as much projection of the music and particularly in vocals, and therefore less dynamics. It was as if the music was hiding somewhat.

It’s a common belief, whether true or not, that plugging power amps directly into the mains precludes conditioners chocking the current and effecting dynamics. Not with this unit. I was ‘erring and arring’ initially over whether this unit was having this effect, maybe being biased to the belief mentioned and because this extra warmth tended to give an impression of less dynamics and ability to hear the stop/start nature of music. Getting used to the sound I realised there is no bad dynamic effects, and in fact the other way around!

I should say I’ve heard similar devices at shows make good improvements to sound quality on relatively modest systems in the circa £4-5k class, but this might be expected with the polluted mains at shows with so many systems being used. The level of performance is clearly going to depend not only on the system but on many factors, but clearly how susceptible the system is to noise, the acoustic environment, and of course the degree of electrical ‘dirtiness’ in your specific mains supply.

Power conditioners really need to be used in situ at home on own systems to gauge their true worth. Home trialling first is essential. In my experience this unit makes a good system really shine and is a finishing touch to a great system. This unit is clearly very well made and is the type of purchase for a sound quality improvement to a very good system and to eek out some extra performance. You shouldn’t use it with budget HiFi and expect the same gains with other higher quality systems, but this is stating the obvious, and there are other power bars to try in the ISOL-8 range too.

Of the other reviews of these conditioners, it is fairly common for reviewers and users to report benefits, so there is a strong and credible consensus this unit will work well in your system. Use it if the system is sufficiently capable and resolving to get great benefits. Only you can know effects to your system by trialling which is a very good idea!

Would I buy the ISOL-8 MiniSub Axis? Absolutely, and this unit comes very much recommended. 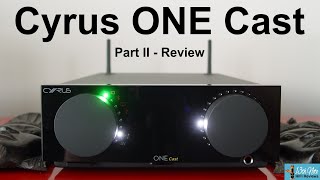